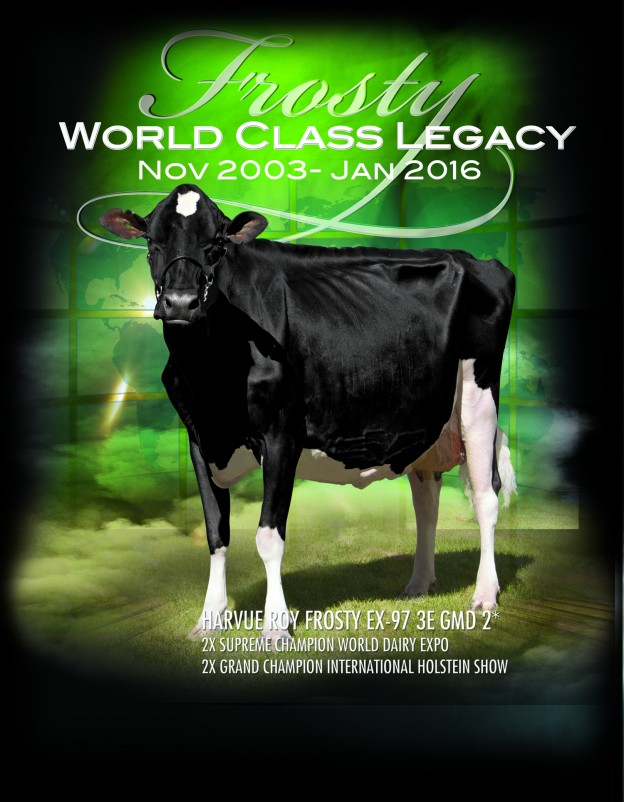 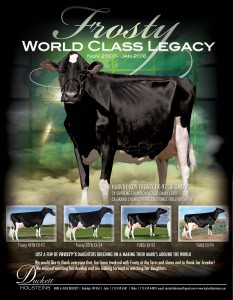 Frosty achieved dairy cow super-stardom by capturing the Supreme Champion banner at the World Dairy Expo in 2009 and 2010. Frosty was a three-time All-American winner, as an Aged Cow in 2010, a 5 Year Old (unanimous) in 2009 and a Senior 3 Year Old in 2007, when she was named Intermediate and Reserve Grand Champion at the World Dairy Expo. In 2009 she was also selected as the Unanimous All-Canadian 5 Year Old. Frosty also garnered an All-American nomination as a Senior 2 Year Old. She was voted All-World in Holstein International in 2010. She obtained the pinnacle classification score of EX97 in June, 2012.

Frosty has left a legacy as a brood cow, in addition to her showring triumphs, having at least 11 Excellent and 22 Very Good daughters, as well as two EX96 sons, Federal at Semex and Freeze at St. Jacobs. Two clones of Frosty are also scored EX95 and EX92.

To say we were blessed to have worked with this cow would be an understatement. Thank you to our partners, Jim & Nancy Junemann and Dr. Scott Armbrust, and to the Hardesty’s for breeding this magnificent individual.